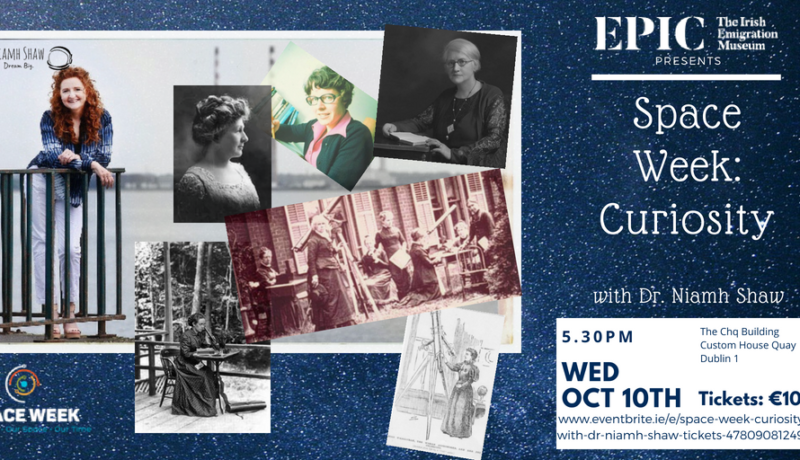 As part of Space Week 2018, Dr. Niamh Shaw, space explorer, artist and communicator will speak about Curiosity and its place in science and technology. Working with EPIC The Irish Emigration Museum and their DFAT Historian-in-Residence, Dr Angela Byrne and using the stories of four Irish women who have contributed to major astronomical discoveries in the past century, Niamh will compare and contrast the lives of these women, their exceptional STEM careers, and how their curiosity united them.

Niamh is one of Ireland’s leading science communicators and STEAM specialists (merging science, technology, engineering, arts and maths), and her contribution to science & its application to Irish life was acknowledged by Uachtaráin na hÉireann, President Michael D. Higgins in 2017. She is artist in residence at CIT Blackrock Castle Observatory Cork, the Humanities co-chair at 2018 International Space Studies Programme & the Dublin point of contact for Ireland’s national Space week 2018. She champions Women in STEM in all her projects and works with the Lottie Doll Company to promote young girls and boys in STEM, bringing ‘Stargazer Lottie’ on all her space adventures.

Niamh is actively pursuing her dream to get to space and has been sharing her global space adventures and expeditions since 2014. In this regard, she participated in a zero gravity flight at Star City in Moscow and regularly visits Baikonur Cosmodrome in Kazakstan for human launches (most recently for tje launch of European Apace Agency Astronaut, Alexander Gerst). She is an experienced analogue astronaut with over 20 EVA hrs from Mars simulated missions in the Utah desert USA and the Negev desert in the Middle East.

EPIC is located in the CHQ building in one of Dublin’s most historic locations by the banks of the River Liffey on Custom House Quay. The fully-digital museum tells the moving and unforgettable stories of those who left the island of Ireland, and how they influenced and shaped the world. EPIC embraces the past and the future with 1,500 years of Irish history and culture housed in its atmospheric vaults. In 2015, a strategic advisory group was assembled to consult on the development of EPIC exhibition which was drawn up in consultation with a panel of academic and expert advisors, including Harry Bradshaw, Dr John Cronin, Catriona Crowe, Mark Duncan, Dr Eibhlín Evans, Rob Hartnett, Professor Eugene Kennedy, Professor J Joseph Lee, Ruán Magan, Mary Mulvihill, Professor Justin O’Brien, Sean O Mordha and Paul Rouse.